Recently, I was reading another blog about the success of the Philadelphia 76ers NBA basketball team. For those that are not basketball followers, Philadelphia has been one of the worst basketball teams/franchises for nearly a decade; until this season. This year, they stormed to a close and made a decent run in the playoffs, with a very young but talented team. Over the years, there were many critics about their approach to building a team, and at this point in time it appears the critics may have been wrong. Rather than react quickly to negative seasons, games, performances; the 76ers strategically planned and built a contending team. They repeatedly wound up in the top of the draft, selecting in top 5 positions (if not the first pick) almost yearly. They battled through injuries of their young players, but didn't give up on them. In the end, they have amassed one of the most talented young rosters in the NBA, and now it's paying off. The concept that the franchise utilized to expand their mindsets and horizons is also memorialized on their practice court in the form of a four-point line. There's no such thing in reality, but the concept is to get their players on the court, and executives in the office to expand their abilities and push themselves to limits that normal franchises would not. This idea of a four-point line can be transferred to any walk of life really. Pushing people outside of their comfort zone and asking for more than they thought was possible is not a bad learning experience. As Philadelphia has learned, it makes the day to day operations and normal functions easier. It removes the stress of the simple tasks and builds the confidence/courage of individuals to attempt and eventually obtain more success than they thought was possible. Education often has spent time working to push the intellectual abilities of our students to obtain more than the bare minimum. Education has also been traditionally a reactive profession where teachers and systems don't always plan for the future and build successful models and strategies; but live in the current, trying to survive the moment. As I have mentioned in the past, the world of public education needs to develop their own four-point line, where people are experimenting and trying new things; attempting to revolutionize the field. The model of taking risks and attempting to change the status quo have worked throughout history in many fields, including education. Just as the Philadelphia fan base trusted the process, regardless of how frustrated they got with the losing seasons; we as an educational community need to trust the process and let the professionals do their jobs. We have amazing individuals with a lot of talent working with our kids. As a collective community, we need to have the patience to let their visions come to fruition. They are working outside of the four-point line on a daily basis. As you've heard before, sometimes you lose a battle to win the war. Our people are ready to make the run to the top, we just need to keep practicing beyond that four-point line and trusting the process.

On Tuesday, June 5, RFA students will not be in session as the State is administering the new Common Core Regents Exam in Global History and Geography. Due to the number of students taking this exam and the amount of staff necessary to administer the exam, the building will not be in session on this day. For more information on the Regents exam schedule, you can visit the RFA website or view the schedule HERE.

In years' past, the elementary schools would always dismiss on the last day of school after an hour or so of school. Unfortunately, this practice was in violation of the calendar regulations that connect a school district to State aid funding. The violation was simply that any day short of a full day does not count towards a district's 180-day allotment. Not a major violation, but not in compliance either. This year, district's have been informed that calendars are being audited which is why if you looked at the 2017-2018 calendar; you will notice that June 22 is a FULL DAY of school for students. Also, there are no traditional half days on Fridays for elementary either, to ensure compliance with this regulation.

As we enter the final month of the school year, many people have long been preparing for the next school year that begins in September. This task also includes the preparations to finish the current renovation project at Strough and return the building to the students and staff. Each day we continue to see progress throughout the site and the planning process for moving back to the building is well underway. Classroom doors are now being installed throughout the building, fixtures within the rooms and library are almost complete, furniture is ordered, technology products are awaiting installation, and the faculty is set for a walk through in the coming weeks so they can better prepare over the summer. As with any project, things always come down to the wire and we anticipate this will be no different. However, at this point there is no reason to believe that we will not be complete with plenty of time to prepare for the opening of school and within budget. 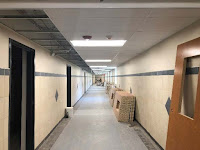 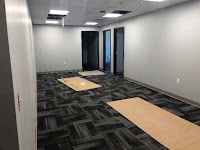 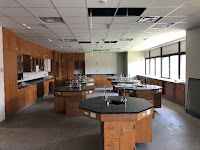 Each year, students and families at the elementary level request transfers to a different school due to childcare needs and family requirements. In the past, we have always asked everyone to complete a new transfer request form for the following year. In essence, we hit the reset button each summer with student enrollment and registration; essentially requiring everyone to jump through hoops again to get their students enrolled in a different school due to childcare reasons. The amount of time and resources that are expunged on the District end is also tremendous. That's why for 2018-2019, we will NOT be requiring families to submit a new request. For the first time, whatever school your student is attending in June 2018 is the school that we are going to enroll them in for the 2018-2019 school year. The only reason that any family would need to submit a transfer request for 2018-2019, would be if their child needed to attend a different school than where they currently attend.
Posted by Peter Blake at 9:12 AM